Ever heard the argument that wind power just doesn’t work? 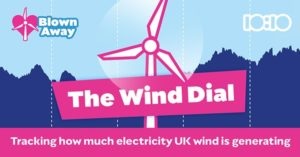 Well, as we wrote this email, it was powering 17% of everything electric in the UK. To put it another way, that’s enough electricity to charge one out of every six smartphones in the whole country—all at once (6.5 million, to be specific)!

Today we’re launching Wind Dial, 10:10’s very own live wind power tracker. At any given point in time, Wind Dial will tell you just how much electricity British wind is kicking out—and what we could be doing with it.

If you’ve ever seen a wind turbine on the horizon and felt a glimmer of hope, this is for you. But don’t take our word for it.

See for yourself. – It’s not all breezy though.

Despite three quarters of the UK public supporting onshore wind, the government has stripped it of financial support, just as it prepares to hand hundreds of millions to fossil fuel generators this winter.

That’s just not fair. And it’s putting this great British success story at risk—along with the climate.

On the 23rd of November, the new Chancellor Philip Hammond will be delivering his first autumn statement. We need to make sure he can’t ignore us. So on the 16th, we’ll be delivering our petition demanding that fossil fuel electricity is not given more public money than clean onshore wind to him.

But we can’t do it without your help. It’s time to speak up.

Manage Cookie Consent
To provide the best experiences, we use technologies like cookies to store and/or access device information. Consenting to these technologies will allow us to process data such as browsing behavior or unique IDs on this site. Not consenting or withdrawing consent, may adversely affect certain features and functions.
Manage options Manage services Manage vendors Read more about these purposes
View preferences
{title} {title} {title}